From Athens, the ship went east into the Aegean Sea. The next day we stopped in Mykonos, a Greek island that is part of the island group called the Cyclades. You may be getting a bit confused about locations at this point, so here is a map of our itinerary that I got from the Princess Web site:

It’s not the greatest map, but you can see generally where all the ports are.

On our day in Mykonos, we signed up for our second shore excursion of the cruise. This excursion left at 8:15 a.m. and took us to the island of Delos, about a 30-minute boat ride away from Mykonos. Delos is uninhabited now, but it was well-known in the ancient world for being the birthplace of Apollo and Artemis. Because of its prominence, it was the home of several temples and other fine buildings. It is mentioned several times in Herodotus’ Histories, which you may remember I was trying to read on this trip (but was not succeeding). Now it is the home of a lot of ruins, mostly unearthed by the “French School of Athens.” And in case you’re counting, it is the sixth UNESCO World Heritage Site we visited on this trip.

Our tour guide, Katerina, made some bold claims about Delos: it was the first place in the world to have a currency exchange, and the Delian League was the first defense league and the only one until NATO. I’m not sure how much of what she said was true, but the boldness of her claims was at least interesting. She told us about the history of the island and many interesting facts. For example, at one point in its history, there were no births or deaths allowed on the island (you could still be born and die; you just had to do it somewhere else), and no one was allowed to be buried there. Also, she told us that shops used to keep their perishable goods cool by digging holes to use as refrigerators. Here she is, singing the praises of Delos to us: 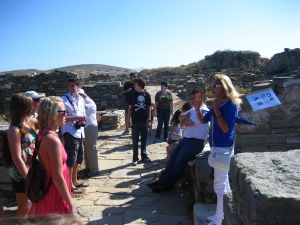 It was warm and dry on the island the morning that we were there. The island was barren except for some scrub brush. Here are a few pictures:

One of the more famous things about Delos, and something you’ll see in most pictures of the island, is the avenue of the lions. It had statues of at least nine lions made of Naxian marble lining the road. The statues you see here are copies made of the originals, which are in the museum on the island: 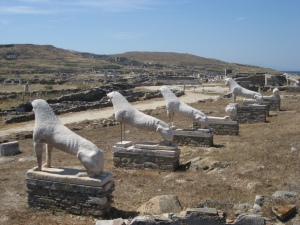 One of the original lions was taken away and put in Venice outside the armory. Its old head was taken off and a “hideous modern” head (according to the information placard in the museum) was put on it.

The only animals we saw on the island were these geckos scurrying around everywhere: 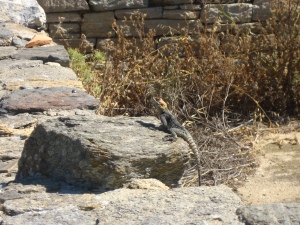 We returned to the ship just after noon, ate lunch, and took the shuttle into town on Mykonos. We spent the afternoon walking around and taking pictures of typical Greek Isle scenes – white buildings with blue trim, and the sea or mountains in the background. Both Mary and dad bought small canvas paintings at one of the shops.

Mary had to exchange some money, but when we got to an exchange office, there was a large pelican (whose name, we gathered, was Pedro. Or maybe Petros) blocking the way:

Mary decided to go ahead and change money anyway. While she was at the window, the pelican gave her a peck on the leg. She said it didn’t hurt, but it was certainly a surprise: 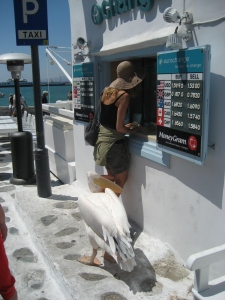 In the afternoon, I was feeling tired so I went back to the ship and read on deck. Mary and dad stayed in town another hour or so to get a drink and some baklava at one of the many cafes.