After spending a day and a couple of nights in Louisville, I drove through Indiana, and the Chicago area, to Wisconsin to visit my brother and his family.

The drive was relatively uneventful, but I will make a few comments:
1. Based on what I saw during the day I was passing through, I would not recommend speeding in southeast Indiana. I probably saw 10 cars pulled over by the police within the space of an hour and a half.
2. If you want to save on gas mileage, move to Indiana. It’s flat, and the speed limit on the highway isn’t 75 like it is in the western states (It’s lower).
3. Don’t EVER drive through Chicago, if you can help it. Especially if there is construction going on. And there always seems to be in the summer months.

After I got to Wisconsin, I spent some time hanging around with my sister-in-law and two nephews until my brother got home from work.

The next day was an eventful one. I went to the Milwaukee County Zoo with my sister-in-law and nephews, where we saw some orangutans: 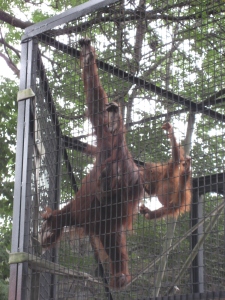 and Calvin and I rode the train:

Then I got in touch with my friends from Regent, Ryan and Tony, and we all went on a tour of the Miller Brewery. At the beginning we were shown a video which began with the words: “From the beginning, man has longed for Miller Time.” From there, it mentioned “Miller Time” perhaps dozens of times. The tour was fun (and we got free samples at the end), but it was mostly good to catch up with Ryan and Tony: 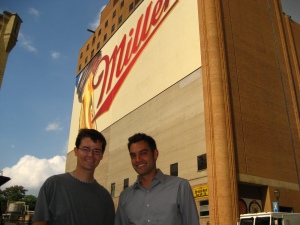 Later that day, my brother and I went to Miller Park to see the Brewers play the Pirates. The Brewers have been selling out lots of games lately, so it was fortunate that we were able to get tickets. It was a great night: I had a brat with “stadium sauce” on it, and the Brewers won, 10-4.

You couldn’t ask for a better day. The only thing that could possibly have made it better would have been if Bernie Brewer (the Brewers’ mascot) still slid into a huge beer mug after a Brewer hit a home run, like he did at the old Milwaukee County Stadium.