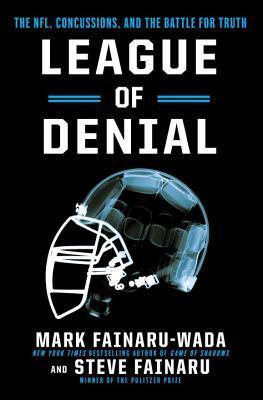 Are you wanting to get angry at powerful people abusing their power? Do you want to make sure you never watch a football game with a clean conscience ever again?

Have I got the book for you!

League of Denial: The NFL, Concussions, and the Battle for Truth tells the story of the NFL’s response to the idea that concussions suffered while playing football can be tied to brain damage in later life.

It begins with the story of Mike Webster, the longtime center for the Pittsburgh Steelers dynasty of the 1970s. For several years before he died in 2002, he was unable to hold a job, unable to live on his own, and unable to even be coherent without the help of drugs like Ritalin. After his death, his brain was examined, and examiners found symptoms that were reminiscent of those found in brain-damaged boxers.

Throughout the ’90s and early ’00s, the NFL’s own Mild Traumatic Brain Injury committee published study after study that claimed there was no connection between concussions and brain damage, often attacking those who disagreed with this stance. At the same time, the NFL’s retirement board “had accepted long-term brain damage as a fact of NFL life for some players” (170), and was disbursing money to former players to help treat their symptoms.

The authors, Mark Fainaru-Wada and Steve Fainaru, repeatedly draw a connection between the NFL’s denial of the correlation between concussions and brain damage and the tobacco industry’s denial of the correlation between smoking and lung cancer. This does seem like a legitimate comparison; however, as the authors themselves point out, it is more complicated in this case. Football has many positive things associated with it that smoking never has: teamwork, leadership development, physical fitness. It is much easier to point to the positive aspects of football and ignore or minimize possible negative aspects.

There is of course more work to be done, especially determining why some long-term NFL players have brain damage and some do not. One of the more troubling parts of the book is the possibility, presented by some researchers, that brain damage in football players may not even be tied specifically to concussions at all; it may be more tied to the repetitive collisions that take place on play after play. Regardless of the conclusions that may be reached in the future, what has already been found so far has been enough for some parents to decide they didn’t want to run the risk: between 2010 and 2012, participation in Pop Warner youth football declined 9.5 percent (355).

If you don’t have time to read this book but would like to know more about some of this history, a Frontline documentary was produced subsequent to this book called League of Denial: The NFL’s Concussion Crisis. As of this writing, it can be watched in its entirety here. Shortly before the documentary aired, ESPN (where the authors work) withdrew its imprimatur from the documentary. They have denied that it was because the NFL pressured them to do it, but let’s be honest: it is most definitely in ESPN’s financial interest to keep the NFL happy, rather than to tell the truth.