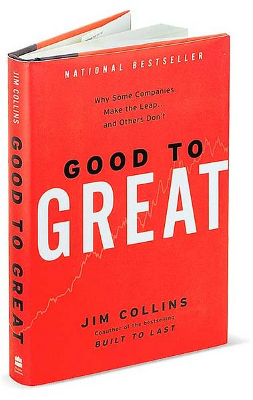 I don’t read a lot of business books, but at least I don’t sneer at them like I used to (progress!). Many of them are not great as literature, but I’ve come to believe that I can learn from almost any book, even if it’s just what not to do.

Over time I’ve come to realize that, like all areas of literature, there are a few business “classics.” Jim Collins’ book Good to Great is one of them. This year, I decided it was time to see what the fuss was about. The book, which was originally published in 2001, grew out of a previous book, Built to Last. In response to that book, someone asked Collins what he could do if he was not part of a company that was great from the beginning. Could it become great? In response, Collins and his research team studied a group of companies that had initially been average but had then transitioned into sustained greatness. These companies had the following characteristics:

As you can see, Collins has a gift for presenting the results of his research in a memorable way (note how most of the key characteristics above conjure up mental images).

Reading the book in 2015, it could be easy to dismiss Collins’ work based on the subsequent poor performance of several of the companies he profiles (Circuit City and Fannie Mae being the most obvious examples). And if you read the book’s lower-rated Amazon reviews, you’ll find that many have. But Collins is clear in the book that these great companies could cease being great at any time if they became arrogant and stopped practicing the things that made them great, thinking that their success was inevitable. That may seem like cold comfort, but I actually don’t mind. The things that Collins calls attention to are both simple to describe and exceedingly difficult to sustain. It makes sense that success would lead to complacency without an extraordinary amount of humility and discipline.

As a side note, I read part of this book in the hardcover edition and listened to part of it as an audiobook. I’d highly recommend the audiobook; it’s read by the author a few years after the book came out, and he occasionally gives updates on some of the things in the book and responds to feedback he has received.