It has been over a month since I last posted, and I’ve been busy. I preached three sermons during that time, in addition to my regular work responsibilities, so I didn’t have a whole lot of time for pleasure reading or thinking bloggy thoughts. 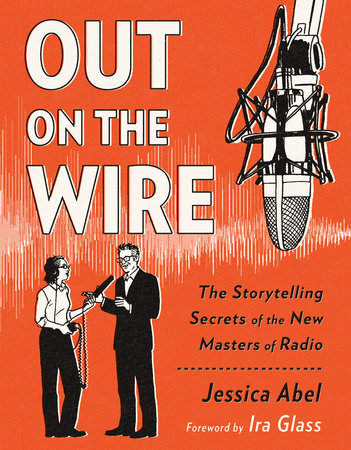 But I did finish a unique book yesterday: Out on the Wire: The Storytelling Secrets of the New Masters of Radio. The author, Jessica Abel, is a graphic novelist, and in this book she uses that medium to explore how several popular radio shows approach the craft of telling a story.

I was drawn to this book because I listen to several of these shows (in podcast form) on a weekly basis—This American Life, Planet Money, Radiolab, and 99% Invisible. I have heard of the others in the book (Snap Judgment, Radio Diaries, and The Moth), but just don’t have time to fit them into my regular podcast routine. In short, I am a big fan of this kind of radio, which Abel calls in the book “narrative nonfiction,” and I was curious to see how they approached the art of telling a story that they are all clearly so good at.

Back in 1999, Abel was commissioned by the host of This American Life, Ira Glass, to create a graphic novel called Radio: An Illustrated Guide as a pledge drive premium. In that book (part of which is reproduced inside this one), Abel illustrated how This American Life went about bringing their stories to the air. This book has a similar purpose, but has a broader scope. It still features Ira Glass (that’s him and Abel on the cover), but also is based on interviews with several other producers and reporters, looking at the methods they use. The book is organized into five chapters that deal, respectively, with ideas, character and voice, story structure, sound, and “the edit” (which is not the same as “editing”; it’s a meeting in which reporters and producers give feedback on each other’s stories).

So what are the secrets mentioned in the title? Well, Abel doesn’t provide readers with a list, so I can only mention some of the things that stuck out to me. In the Idea chapter, Abel tells readers that reporters often try to phrase potential stories as part of a general formula as a rough way to see if they will work. For example, it’s often difficult in the beginning to separate a topic from an actual story. So Alex Blumberg, formerly of Planet Money, uses this formula: “I’m doing a story about X”—the topic—”and what’s interesting about it is Y”—the story. If you don’t have an answer for the second part, you don’t have a story yet. In the Character and Voice chapter, reporters share various tricks that they use to try and get an authentic, interesting voice out of people, including themselves. Robert Smith of Planet Money, for example, models behavior for people he’s interviewing: he tells jokes himself if we wants other people to be funny. In the Story Structure chapter, Sean Cole of Radiolab talks about signposting—overcommunicating important details to listeners. When you’re telling a story, you tend to communicate less because you assume everyone is on board. But to keep people engaged, you have to state and restate the “obvious,” because it isn’t always as obvious as you think: who is speaking, what this key moment means, etc. In fact, my one main criticism of this book is that I wish there were more signposting. There were so many different people talking, and so much switching back and forth, that even though Abel drew them the same way every time, it would have been nice for her to restate their names again.

This book will of course be most interesting to people who are wanting to get into this world of narrative nonfiction radio as a career or avocation. But it is also interesting to people—like me—who are in any sort of creative work (writing sermons, editing books) and wondering how other people do it.