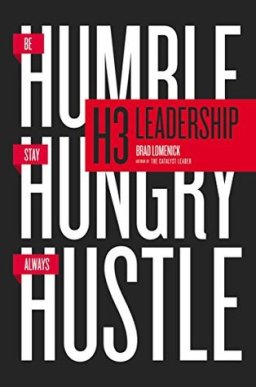 For about six months a couple of years ago, I was a regular listener of the Catalyst podcast. Catalyst is an organization that seeks to grow young leaders in business and the church through conferences. I had never been to a Catalyst conference, and I can’t even remember now how I became interested in the podcast. I was probably interested in hearing an interview with someone I had heard of.

At the time, the podcast was hosted by Ken Coleman and Brad Lomenick, the president of Catalyst. While leadership podcasts aren’t really my thing (they tend to be sources of encouragement rather than new information, which is what I’m more usually interested in from a podcast), I stuck around with Brad and Ken for a while because I liked their personalities.

Fast forward a couple of years. Lomenick had taken a sabbatical and decided to leave Catalyst. He has written a book (his second) on the habits of leading called H3 Leadership: Be Humble, Stay Hungry, Always Hustle. I had stopped listening to the podcast, but I was familiar with Lomenick and was up for something a little different than what I usually read, so I picked it up.

The book consists of 20 chapters, each of which brings out a habit of leadership. These 20 habits, like Conviction, Curiosity, Bravery, and Generosity, are categorized into three broad groups (the “humble, hungry, hustle” of the title). Each chapter consists of Brad describing the habit, telling a story or two to illustrate it, and various other leaders Brad knows sharing their brief thoughts on that habit.

This is an easy and a fun read. If you’ve read any books on leadership at all, the organization of the book will be new, but many of the concepts will not. It’s pretty straightforward stuff. But as with the Catalyst podcast, I’ve found most leadership literature to be more of a source of encouragement than new information. That’s not necessarily a bad thing. As Samuel Johnson said, “People need more often to be reminded than to be instructed.”

The only negative I came away with was the pull quotes on each page. Each one of them is prefaced by a little Twitter symbol, a not-so-subtle indication that this, dear reader, is both a good quote and within Twitter’s 140-character limit. I found that to be a little too much hand-holding. Readers will respect you more if you challenge them a bit. But that is more of a pet peeve of mine, and it is more the book designer’s fault than the authors. On a positive note, Lomenick’s tone is perfect for a leadership book. He strikes the right balance between authority and vulnerability. If you’re looking for a quick leadership read to keep you focused and motivated, this is a good one.