Jesus desired that those in his church “may be one,” but it is all too evident that this is often not the case. And it isn’t just denominational differences; it’s hard for individuals to get along in a single church. How do church leaders begin to address the problem of disunity?

J. Brian Tucker and John Koessler, who are both associated with Moody Bible Institute (Koessler teaches at MBI in Chicago, and Tucker at a Michigan seminary campus), have attempted to answer this question in All Together Different: Upholding the Church’s Unity While Honoring Our Individual Identities. They believe that the answer to disunity is not to force cultural uniformity but to glean lessons about how to get along from the Bible and research on social identity theory. (By the way, Tucker and Koessler don’t really talk about divisiveness in the United States. While some of what they say could possibly apply to the country at large, they are focused on the church.) 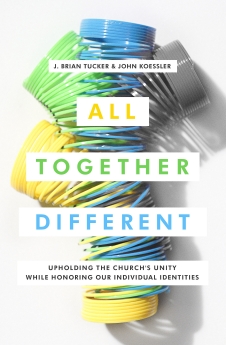 That phrase above, “research on social identity theory,” is a clue that this is not a light Christian living title. The book may have a bunch of Slinkies on the cover, but it’s not for kids—or even for adults who are interested in something fluffy. Take this sentence from the introduction: “What is needed is the recognition that existing social identities must be a part of the way the church’s theological constructs are communicated. In other words, by paying attention to issues of identity, we are able to discern which theological constructions are best suited for clarifying those issues of identity that need to be transformed in the life of the church” (13). If sentences like that are not your cup of tea, then maybe this isn’t the book for you.

But for those who actually get excited at the prospect of putting on their thinking caps, this is an enjoyable read. First Tucker and Koessler look at the slippery concept of identity, and then how Christians’ identity ought to be formed primarily by the Bible—and specifically the concept of being “in Christ.” Individuals have different senses of identity, like Russian matryoshka dolls, but there is always one “master identity.” Christians must have their being “in Christ”—united to him and to each other—as their master identity. Without that, nothing will help a church get along.

In the latter part of the book, they look at three common stress points in church: race, sex, and generational differences. I thought these three chapters, while somewhat helpful, were the weakest part of the book. It may just be the nature of the case that in a chapter each they weren’t able to treat these issues with the depth and nuance they deserved.

All in all, though, this is a helpful book for pastors and other church leaders who are looking for ways to see diversity as a gift rather than a threat in their churches. The final chapter gives nine principles for moving forward, and church leaders could do a lot worse (and have done a lot worse) than prayerfully studying and teaching principles like “Allow faith to transform your identity,” “Only God can tell you who you really are,” and “Don’t be afraid to live like an outsider” when it comes to the wider culture.