I’ve read a handful of Christian marriage books in the time that my wife and I have been married, and I find that generally marriage books tend to fall somewhere on a spectrum between practical and theoretical. The practical books give you a lot of specific advice on how to get along with another person, but can fall into the trap of generalizing too much based on the authors’ experience. (For example, one book my wife read a long time ago seemed to offer a lot of advice that was specific to being a middle-class person in the southern United States.) The theoretical books tell you a lot about what marriage is for, but can be so short on offering specific help that they can turn into a slog. 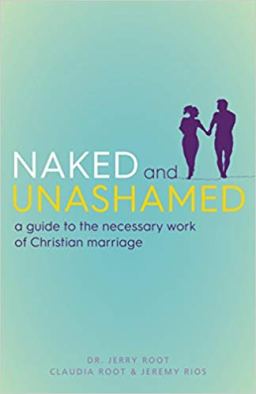 The best Christian marriage books are ones that combine the two. They paint a picture of what marriage ought to be while refraining from holding up every part of the authors’ experience of marriage as prescriptive for all other couples. It’s a fine line, for sure, but I think Jerry and Claudia Root and Jeremy Rios have done that in Naked and Unashamed: A Guide to the Necessary Work of Christian Marriage. This book came out of the Roots’ experience of doing premarital counseling for over a thousand couples over the years, including Jeremy and his wife, Liesel. When Jeremy became a pastor, he began using the Roots’ material in his own premarital counseling sessions, and eventually they decided to shape that material into a book.

The central theme of this book is the hard work needed to maintain vulnerability in marriage. This vulnerability is displayed in four major areas: relational intimacy, communication, expectations (specifically in the areas of family and culture, parenthood, and finances), and sex. Maintaining vulnerability is incredibly difficult for two sinful people to keep up over the years, but it is what keeps marriages healthy. As the authors write, “The work required from you in marriage will exceed what you believe are your personal capacities, and therefore couples make a mutual promise before God that they will stick to one another no matter what. It is this promise, more than anything else, that makes marriages what they are” (5).

Who is this book for? Primarily couples who are preparing for marriage, though I think many chapters could be helpful to either engaged couples or ones who have been married for a while. Each chapter ends with an assignment that asks you to discuss the subject of that chapter with your partner, which will particularly be helpful to engaged couples who may not have talked about these issues before.

This book will also appeal most to conservative evangelicals. I hesitate to say that, since I think it presents far more than an idiosyncratic view of marriage embraced by a relatively small subculture. I am myself a conservative evangelical (with the caveat that when I say “conservative” I’m speaking theologically, not necessarily politically), so I believe that what the book presents is largely the historic Christian view of marriage, including elements that have become less popular in our Western cultural moment, like saying that sex is meant for marriage, and marriage necessarily involves gender complementarity.

But what does gender entail, apart from biology? Things get tricky when you start talking about masculinity and femininity and the roles men and women should generally take in a marriage. For example, the authors write of women that, since they are “wired to nurture,” they “often have a high need for security” (30). On the other hand, “for men, the deepest need may be partnership” (31). Then they issue the caveat that, “naturally, dividing gender in this way doesn’t mean that men don’t desire to be cherished, nor that women do not wish for partnership, but in general our biology leads us into a propensity toward these responses” (31). Later, in their chapter on unpacking gender, they “propose two ways to perceive the differences in gender—one suggests that men and women are assertive vs. nurturing, the other that we are linear vs. networked” (67).

I don’t envy anyone who sets out to write a book on marriage, since making generalizations about gender is unavoidable when attempting to reach a broad audience. On the one hand, stereotypes are stereotypes for a reason; they’re often true. But there are always exceptions; what should be done about them? The best you can do, I think, is what the authors do—say what you think, and admit that others might disagree: “Are you unconvinced by our hypotheses, and convinced that there are further complexities to be investigated in this area? Have a conversation where you try to decide between the two of you the exact defining characteristics of masculinity and femininity. If you can figure it out, then write the book—you’ll make millions!” (69).

Like me, you may come across occasional statements in this book—especially regarding how men and women tend to behave in marriage—where you think, “But what about this exception, or that situation?” That’s fine. But personally, I would rather the authors share their experiences and say what they think (including their interpretation of the famous passage on marriage in Ephesians 5:21–33), even if I might wonder about some of it, than throw their hands in the air and say “Everybody’s different! Do what’s right in your own eyes!” That would have been far less helpful.

The point of this book is that maintaining vulnerability and openness in marriage is hard work, but it is incredibly rewarding work. This carries added weight coming from both a couple (the Roots) who have been married for over forty years and a man (Rios) who is in the busy middle stage of raising four young children with his wife. With plenty of thoughtful reflection on what marriage is, along with many practical tips and stories from the authors’ own marriages, this is one marriage book that avoids the pitfalls of being too far off the ground or too focused on the authors’ own experience. I would recommend it for any married couple who wants to be reminded of the incredible blessing marriage can be, as well as for any engaged couple who wants to see clearly what it takes to stay married.

Notice of material connection: I received a copy of this book from Paraclete Press for the purpose of review. I also attended Regent College with Jeremy Rios and count him as a friend.