Mary, my dad and I got up early (two words: jet lag) and wandered around a northern district of Venice called Cannaregio (our B&B was just across the Grand Canal from this district, in Santa Croce). Since it was early and we weren’t at St. Mark’s, it was quiet as we walked up and down the canals. We saw a couple of churches (San Girolamo and Chiesa della Madonna dell’ Orto, where Tintoretto is buried), but neither were open that early. This area holds the dubious distinction of being the oldest Jewish ghetto in Europe, and there still appears to be a small Jewish community there. Even though it was mild and overcast for most of our meanderings, on our way back for breakfast it started pouring rain.

After breakfast, we took the vaporetto to St. Mark’s Square. There was a long line, as there apparently always is, but it moves fast. There are some beautiful mosaics inside, though it was dark and crowded. 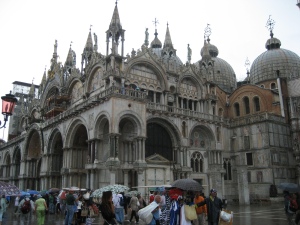 Afterward, we walked around the square to soak it all in (it was still drizzling), skipped the Doge’s Palace next door and walked to San Zaccarias, where John the Baptist’s father Zechariah is allegedly buried. There is also a shrine to St. Athanasius there, which I was surprised to see. It looked as though Athanasius was buried there as well, but after the trip I looked it up and apparently he used to be, but isn’t any longer. His body was buried in Alexandria, taken to Italy (where I suppose he was buried in San Zaccarias), but in 1973 Pope Paul VI gave his remains to Pope Shenouda III (of the Coptic Orthodox Church). Now he is buried in the St. Mark Coptic Orthodox Cathedral in Cairo. It’s great for the Coptic Orthodox Church, but too bad for me, because I was excited to see his tomb.

Why was I skeptical about Zechariah being buried there but excited about Athanasius? I am (at least initially) skeptical about most relics and remains that I encounter from the earliest years of the Christian era. My reason is this: for many years, Christianity was a very small movement. It wasn’t until later that Christians were able to build churches set aside for worship, and place relics in them of special significance. So in many cases, there is a long gap between the life of a particular saint and the finding of the relics associated with that saint. For example, Constantine’s mother Helena discovered pieces of the True Cross about 300 years after Jesus’ crucifixion. I think that the longer the gap, and the greater the desire of Christians to discover relics, the less likely it is that those relics are genuine. 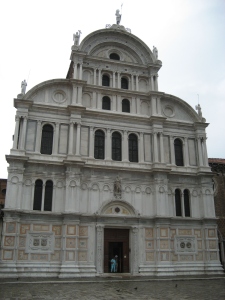 After San Zaccarias, we walked back toward our B&B across the shopping district around the Rialto Bridge, where Mary bought a scarf. We also went inside another church: San Polo, where there are some nice paintings of the Stations of the Cross by G. Tiepolo. And a Tintoretto, of course. Then we got gelato again and sat in a square for a bit before we got our bags and set out toward our cruise ship, the Emerald Princess. I will not relate to you the harrowing journey that we took, lugging our suitcases, to get to the ship… but suffice it to say that it would have been MUCH easier had we known that Princess ran a shuttle to the ship from St. Mark’s Square.

But we made it, and spent the evening exploring the huge (3000 passenger), shiny and new (started service April 2007) ship. 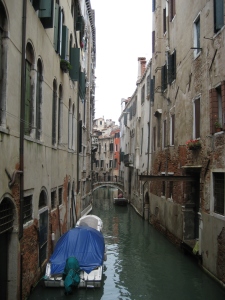