The day after Rhodes, the Emerald Princess stopped at Santorini. Just like at Dubrovnik, the ship stayed offshore, and passengers were taken to land on tenders that pulled up beside the ship. Santorini is, geologically, a fascinating place, since it is what remains after a huge volcanic eruption in 1500-1650 BC. It is an archipelago with a caldera (sunken ground from a volcanic eruption) in the middle:

The western side of the eastern island is a steep cliff, and then the island tapers off gradually to the east. There are three ways up the cliff: walking up a steep path with lots of switchbacks, taking a mule up that same path, and taking a cable car up to the top. In this picture, you can see the path and how steep it is; you can also just make out the cars on their way up. 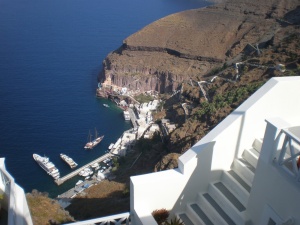 In the morning, the three of us took the cars up to Fira, the largest town on Santorini. Here are Mary and Dad in the car, with our ship in the background: 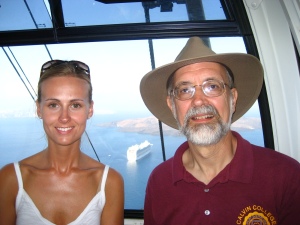 It was quiet in the morning, so we walked to the south end of the town, taking pictures of houses, churches and the stunning view. Then we turned around and walked north again, this time going into shops. Mary bought a couple of mother-of-pearl bracelets. We also bought some food at the grocery store.

I think I’ve mentioned in another post that I’m not a huge buyer of souvenirs aside from stickers, patches and the occasional magnet. I like to buy things that a particular vacation destination is known for – hence my unsuccessful attempt to buy a tie in Croatia. If I don’t know of anything that a place is known for – or don’t want it – I’ll still sometimes buy food there. I think that food unique to a place is fascinating; even if it’s just a candy bar that I’ve never seen before. At the grocery store, I bought a bag of peanuts covered in caramel and rolled in roasted sesame seeds. They were SO GOOD, and apparently Santorini is known for them, since I saw them being sold at souvenir shops as well – for two euros more than at the grocery store. So if you’re like me and enjoy buying food from places you visit, it pays to find a grocery store.

Then we walked north of where we had come up, continuing to take more pictures and just take it all in. We stopped walking at the Church of St. Nicholas; it looked like the town was beginning to taper off. 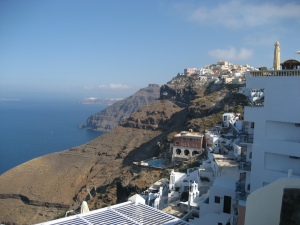 We turned around and walked back. On the way, we stopped at one of the cafes overlooking the caldera and had a light lunch: Mary had a greek salad, I had some dolmathes (stuffed grape leaves), and my Dad had grilled cheese (not a grilled cheese sandwich; this was literally grilled cheese) and some of that famous Greek liqueur, Ouzo. I tried a little bit of it, and liked it. It is flavored with anise, which means that it tastes a little like licorice. At the end, we all split some baklava. Here is a picture of Mary and I at the cafe: 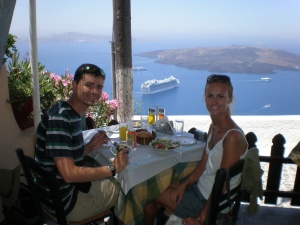 After lunch, Mary and Dad wanted to look around some more, but I didn’t think I would get anything so I went back to the ship. Instead of taking the cars back down (or riding a mule), I walked. It wasn’t bad, if you don’t slip on mule poop (which I didn’t). 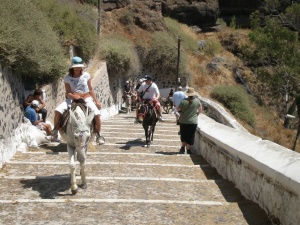 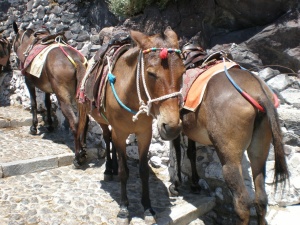 In the evening, after dinner, we watched another one of the “Movies Under the Stars” up on deck. This time it was “Juno.” We all thought it was good. The only critique that I had of it was that I thought the dialogue was a little too clever to be believable. But I liked the story.