On Wednesday, June 18, we got up in Rome and had breakfast at the little cafe next to our B&B – a creme-filled croissant and a cappucino. My kind of breakfast. Then we were off to the major sight in Rome that was geographically closest to us: the Basilica of St. John Lateran. The nun who spoke to us the day before at the Pontifical North American College had recommended that we get to the papal audience a couple of hours early, like 8 a.m. But we decided that we would leave the best seats for the actual Catholics, and show up at around 10 for the 10:30 audience.

So at 8, instead of arriving in Vatican City, we were walking up to St. John Lateran. Of the four basilicas in Rome, it is oldest and ranks the highest. Even though the Pope lives right next to St. Peter’s in Vatican City, his cathedral church is this one – it’s older than St. Peter’s, and the popes even lived in a palace next door until 1309, when the papacy temporarily moved to Avignon, France. 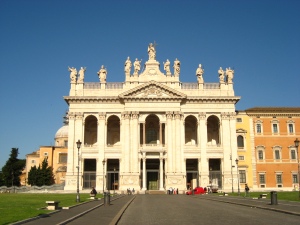 As you can see, the weather was wonderful. And once we got inside, there were very few other people there. There were a few other tourists like us, and a few people who apparently were just stopping in to pray on their way to work. After being in crowded churches for most of our first day in Rome, this was a welcome change.

Even though the church is a very old one, its current construction is Baroque. One of my favorite things about it was the statues of apostles in the nave, like this one, of Philip: 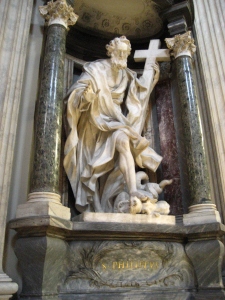 Here is the papal cathedra, located in the apse:

Here is a picture of the nave, with the statues on either side:

After St. John Lateran, we hopped on the metro and went to Vatican City for the papal audience. Whenever he is in town, Benedict gives papal audiences every Wednesday morning. Tickets are free, and we got ours from the Pontifical North American College in Rome. This was the second papal audience I’d been to. The first one, on the trip to Rome when I was 15, was when John Paul II was pope. He was not feeling well at the time, so instead of coming down into the square, he appeared in the window of his apartments above the square and gave his lesson and blessing from there.

This time, it was different. At about 10:30, (the scheduled start time) lots of people began to stand up and look around for Benedict to appear. A few minutes later, he zoomed out from the left hand side of St. Peter’s in his Popemobile, waving and smiling. He goes through and around the crowd once or twice, but no one knows which way he’s going to go for security reasons. We didn’t have the best seats for seeing him when he came by (because we hadn’t gotten there at 8), and here is a picture I took from standing on my seat:

After that, though, his route around the square took him to the very back of the area designated for papal audience spectators. There weren’t many people back there, obviously, so I was able to head back and get a couple of much closer pictures:

After his trip around the square, he sat down under a canopy in front of St. Peter’s and proceeded with the audience. The scripture reading was from the book of Wisdom (sooooo Catholic), and the substance of his message dealt with the example of Isidore of Seville. He gave it first in Italian, then a shorter version of it in several different languages. I can’t remember exactly, but I think the order was German, English, French, Spanish, Portuguese and Polish. Do you want to read the whole thing? Of course you do. Here it is, courtesy of the Vatican Web site. We left after the English portion (and before the blessing of young people, sick people, newlyweds and objects), because we had a lot to do, beginning with the Vatican Museum.

The Vatican Museum is one of those museums that seems too big to do justice to in one day. I’ve never been to the Louvre, but I have been to the Hermitage in St. Petersburg, and it took three visits before I felt like I had even seen everything. We couldn’t see everything in the Vatican Museum, so we had to make do with the highlights. We started off with the Pinacoteca (Art Museum), and got to see some great Raphael paintings as well as a Caravaggio, a da Vinci, and lots of other great stuff. Then we went to the Ancient Christian part of the museum, and saw a whole lotta tomb reliefs and a few statues. Then we wanted to see the Raphael Rooms, but couldn’t find them at first. We resigned ourselves to following the hordes of people surging toward the Sistine Chapel (the last thing anybody sees before they exit, and presumably the only thing many people come in to see)… We passed by a long corridor with maps on the wall, and a few other long corridors, and we were getting close to the end… But wait! Is that a sign for the Raphael Rooms? Why yes, it is!

So we went into these rooms, and this was really the highlight of the museum for me. This is a series of rooms that Raphael and his school painted frescoes in, and they weren’t crowded at all. The most famous of these frescoes was the one that he painted second, in the room that was once the library of Julius II. It’s called The School of Athens, and depicts Plato and Aristotle in the middle of a crowd of philosophers.

I couldn’t get a good shot of the whole thing head-on, but there are other pictures of it online.

After that, we went into the Sistine Chapel. Beautiful, of course. But crowded. And the ceiling is high up, and the Last Judgment is too big to take in in less than a few minutes. When I was there, I was more impressed by thinking of all the papal enclaves that have taken place there over the years. But maybe that was because I’d seen the paintings before.

When we came out of the Sistine Chapel, we went through a long corridor back out of the museum, and stopped by the Archives. 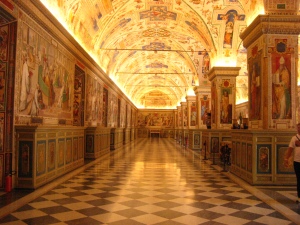 Once out of the museum, we went back to St. Peter’s Square and got in line to go into St. Peter’s. I didn’t remember a line to get in when I was there before, but when we got to the front of the line we saw what the hold up was: security. Once through, we got to stroll on in. The lighting was particularly beautiful on account of the sun setting: 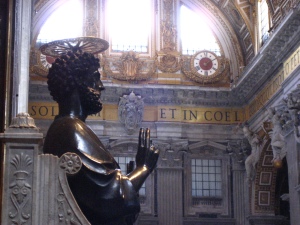 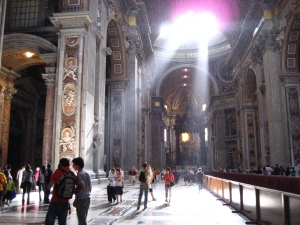 When we got back outside, I took another picture:

Before we went home on our last day before we flew back, we decided to swing by the Spanish Steps – just because they’re a big tourist stop in Rome. We did. There were a lot of people there. It was OK, but not my favorite part of the day. Perhaps I was just tired.