Last week, as many of you know, I went to Boston to visit my friends Neal and Danielle. I know them from when I taught English in Budapest in 2003-2004, and they have lived just north of Boston for nearly four years, but this was the first time that I made it over for a visit.

On Wednesday, the first full day I was there, Neal just had an evening class (he is a student at Gordon-Conwell Theological Seminary), and I wanted to see as much of New England as possible, so he was kind enough to drive me north through part of New Hampshire and into southern Maine. Here are a few pictures from that day:


Thursday, Danielle had to work, and Neal had no classes, so the two of us took the train down into Boston and walked most of the Freedom Trail backwards. We skipped the U.S.S. Constitution and the Bunker Hill monument (though we saw them both across the water) and started right in with Copp’s Hill Burying Ground (no cemeteries in Boston, apparently – just burying grounds) and the Old North Church.

Then we stopped to have some deliciousness at Mike’s Pastry, looked through Faneuil Hall, and stopped at the Park Service Visitor’s Center next to the Old State House.

Then we walked by the Old South Meeting House (no longer a church, hence you have to pay to go in, hence we didn’t go in), a memorial to the Irish potato famine, the old city hall (now a steakhouse!), and looked at the King’s Chapel Burying Ground, our second old burying ground of the day.

The third old burying ground of the day was the Granary Burying Ground, and it probably had the biggest share of well-known people taking their eternal repose. John Hancock is there, as well as Paul Revere, Samuel Adams, the five victims of the Boston Massacre, “Mother Goose,” and Benjamin Franklin…..’s parents.

As a geeky evangelical, I was glad to see Park Street Church, which I had heard about before. in 1829 it was the place where William Lloyd Garrison made his first public speech condemning slavery. Billy Graham led a crusade from there in 1949. Harold Ockenga, co-founder and first president of the National Association of Evangelicals, Fuller Theological Seminary and Gordon-Conwell Theological Seminary, was minister there from 1936 to 1969.

Then we found ourselves on Boston Common, and went up to the State House adjoining the Common and took a tour.

The tour was interesting. It was fun to hear all about Massachusetts political history and look at the little things they put in their state house to give it a uniquely Massachusetts character. One of those things is the Sacred Cod, which (so the story goes) was given to the House of Representatives by someone from the fishing industry who didn’t want lawmakers to forget that important part of the Massachusetts economy. Now, the House of Representatives can’t meet without the Cod present (which put them in a pickle when a few Harvard students stole it in 1933. It was returned unharmed).

After the tour of the State House, we wandered around Boston Common for a bit. We took a look at the pub which was the inspiration for the TV show Cheers, but didn’t buy anything there (though the Red Sox were playing the Rays on TV at the time, and I was tempted). I have a policy against buying things off a menu where no price is given (for the drinks, anyway).

After taking a rest at the “Make Way For Ducklings” statue in the Public Garden, we continued west to Trinity Church, which is right next to the Hancock Tower. 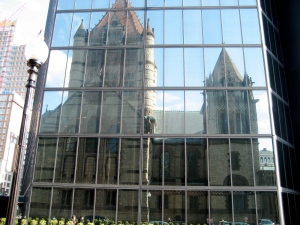 Then we looked inside the Boston Public Library, across Copley Square from Trinity Church, and called it a day.

The next day, Good Friday, Neal and Danielle both had to do some work. So I took the train in by myself and took the “T” (their abbreviation for the subway) to Cambridge to have a look at Harvard.

In some ways, Cambridge struck me as just a typical university town, except older. I was impressed by the bookstores, though.

I wish I’d kept track of how many signs I saw indicating that George Washington had been somewhere or done something. He apparently did a lot of things in New England, and there seems to be a plaque commemorating just about all of them.

In the evening I went to a Good Friday service at Neal and Danielle’s church. The service was structured around the seven last words of Jesus from the cross, and Neal talked about the first one: “Father forgive them, for they don’t know what they are doing.”

The next day was Saturday, and Neal and I drove down to Rhode Island and Connecticut, checking out the scenery and reading from John Hodgman’s book The Areas of My Expertise. We stopped at an old mill in Pawtucket, RI, which is the birthplace of the Industrial Revolution in America. The weather was nasty, though, so we passed on the tour of the mill and watched a film in the visitor’s center instead.

Then we went on through Providence and eastern Connecticut (passing Foxwoods, a huge casino, along the way) on our way to Hartford. Ever since Mary and I watched the Ken Burns documentary on Mark Twain, I’ve wanted to see the house he had built for his family there. It was impressive, and an interesting tour, but unfortunately they don’t allow tourists to take photos inside. Here are a couple of the exterior:


After the visit to Hartford, we went back to Massachusetts and had dinner with Danielle and two of Neal and Danielle’s friends. The next morning, Easter morning, Neal took me to the airport and we had Dunkin’ Donuts on the way. It was a wonderful trip, and I’m very thankful to Neal and Danielle for being such great hosts.

4 thoughts on “Back From Boston”