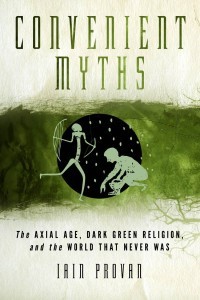 It was the author, rather than the subject matter, that drew me to Convenient Myths: The Axial Age, Dark Green Religion, and the World That Never Was. In fact, I had never heard of the “axial age” or “dark green religion” before reading this book. I was, however, familiar with Iain Provan. I studied at Regent College, where he teaches, and I found him to be one of the most careful, nuanced thinkers I had ever met. If he decided that a subject was worth writing about, I knew it was going to be good.

Although the specific subject matter was new to me, the broader issue of reconstructing the past so it is more useful for present purposes is not. I see this frequently when it comes to the history of the United States. There are some Christians who emphasize the role of faith (and specifically Christianity) in the founding and early history of the country. The implication is that in order to get back to “what the founders intended,” the advance of secularism in public life needs to be reversed: we need to display the Ten Commandments in courthouses, pray in schools, teach history in a certain way, etc. There are, on the other hand, secularists who seek to downplay the role of faith in the country’s history: pointing out, for example, that God is not mentioned in the constitution and that there has never been a religious test for office in national government. The implication is that in order to get back to “what the founders intended,” government needs to be separated from religion. I have written before about this issue in my review of a DVD curriculum called the Truth Project. I will sum up my thinking here: treating history as a tool to advance a present agenda amounts to a failure to love our dead neighbors.

That is part of Provan’s argument as well. In chapter 1, he introduces readers to Karl Jaspers’s theory of the “axial age” (800–200 BCE), which Jaspers called “the most crucial turning point in history; it was then that man as he is today was born” (8). In this age, despite the differences in the religions that emerged, humanity had a unifying goal of self-transcendence. Jaspers’s theory has been advanced more recently by people like Ewert Cousins, and popularized by the likes of John Hick and Karen Armstrong. In chapters 2 and 3, Provan points out some criticisms of this theory and argues that, based on historical data, there never was such a thing as the axial age. It ignores or twists too much data that go against it, and the theory should be abandoned.

In chapter 4, Provan shifts to talking about the “dark green golden age.” This was a much earlier age filled with “dark green religion,” which, according to Bron Taylor, refers to “religion that considers nature to be sacred, imbued with intrinsic value, and worthy of reverent care” (44). This idea (and the idea that this is something we need to return to) is promoted by people like David Suzuki and Derrick Jensen. Just as with the axial age, Provan takes two chapters (5 and 6) to argue that there in fact never was such an age of dark green religion, based on historical and anthropological data. He writes, “We have never lived in a world in which people manage and take care of their environments, making sure that they never misuse or overexploit anything and consequently enjoying a world in which there is plenty for everyone” (66).

Chapter 7 is the turning point of the book. In it, Provan explores the question why so many well-meaning people have believed two theories that are so clearly lacking in historical truth: “The answer, I believe, is that they need to be true if the past is to be useful to advocates in pursuit of a particular understanding of our present moment and a particular vision of the future” (85). He goes on in chapter 8 to give a (very) brief overview of ancient history, emphasizing the ways in which it deviates from the axial and dark green accounts. The next chapter contains some specific ways in which axial age and dark green religion advocates have misused Provan’s own area of professional knowledge: the Hebrew Bible, or Old Testament. He concludes in a final chapter: “The mythmakers behind the myths of the axial age and the dark green golden age do violence to the ancient religions and philosophies they claim to describe. They do so in the course of distorting the past in general. This is problematic in terms of ethics. It matters, because it is morally wrong. We should not disrespect the past or the peoples of the past. We have a duty to tell the truth” (121).

Convenient Myths is brief (just 127 pages, not including endnotes), but it has the potential to do a lot of good. This is not a hatchet job; he has many positive things to say. Throughout, Provan is deeply sympathetic to many of the goals held by advocates of the axial age and dark green religion. He, too, wants to live in a world that is more compassionate. He, too, wants to live in a world in which humans take care of their environment. However, he argues that the ends do not justify the means. This is an important book to read, not just for those who are tempted to believe in the axial age or dark green golden age, but for any people who are tempted to disrespect their dead neighbors by distorting history to pursue a present agenda.

Update: The book launch lecture for this book,”Reading Culture: The War of Myths and the Mission of the Church,” is available FREE (as of this writing) here.

Note: Thanks to Baylor University Press for a copy of this book in exchange for an honest review.