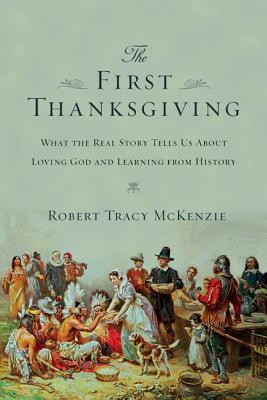 American Thanksgiving is coming! (after living for four years in Canada, I can’t help but add the “American”) As we gather around the table with family and friends, many of us may be in a reflective mood about what we are thankful for and the history of this holiday.

If you, like me, enjoy filling your reflective moments with reading, then have I got a book for you. The First Thanksgiving: What the Real Story Tells Us about Loving God and Learning from History, by Robert Tracy McKenzie, is the best book I have ever read on the history of Thanksgiving (admittedly, I haven’t read many). It is not just a historical account of the Pilgrims who founded the Plymouth Colony in 1620, although there is some of that. It is also a treatise on how to think as a Christian about history: approaching the past with humility, and neither glorifying nor demonizing the people we find there.

I’ve written a brief review on the Vyrso blog, which I encourage you to check out. To whet your appetite, here are a few of my favorite quotes from the book:

We must beware of the temptation to go to the past for ammunition instead of illumination—more determined to prove points than to gain understanding.

As applied to history, we engage in moral judgment when we use our critical faculties primarily to determine the guilt or rectitude of the people, events or belief systems we encounter in our study. In contrast, we approach history as a medium for moral reflection when we determine to make ourselves vulnerable to the past, when we figuratively resurrect the dead and allow their words and actions to speak to us, even “to put our own lives to the test.”

We who name the “name above all names” have all too often acquiesced, in part by convincing ourselves that, given America’s “Christian culture,” there were no hard choices to be made—that our religious and national identities were mutually reinforcing, if not downright indistinguishable. But if knowing we are pilgrims means that our true citizenship is in heaven, it also means that we are “strangers” and “aliens” here on earth—yes, even in the United States—and this means, in turn, that we should expect the values of our host country to differ from those of our homeland.

UPDATE: The publisher, InterVarsity Press, has posted a video about the book:

Also, here are two articles about the book: First, an interview with the author. Second, a review by historian Thomas S. Kidd.