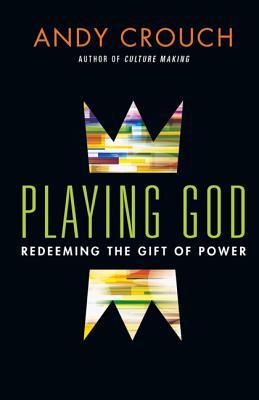 The word power has the ability to make even the least squeamish among us flinch. It can call to mind images of violence, abuse, and selfishness. When we hear the word power, we think of Lord Acton’s saying, “Power corrupts, and absolute power corrupts absolutely.” It is bad guys who have power, we think—even though it was He-Man, not Skeletor, who said “I have the power” in every episode of He-Man and the Masters of the Universe. Even people who want to use their power for good (so common knowledge tells us) must wield it cynically, unable to keep themselves from being dirtied by it. People who don’t want to compromise must avoid power at all costs.

Andy Crouch will have none of this kind of thinking. His contention, in his book Playing God: Redeeming the Gift of Power, is that power is good. It is a gift. It is, he writes, “the ability to make something of the world” (17). He sets out to show us in this book what power was meant to be, and what it still can be. It is not always a zero-sum game, in which my increase in power means a decrease in someone else’s. We have been taught to think this way through the influence of thinkers like Nietzsche and Foucault, and it is reinforced during even the most civilly contested elections—which theoretically exist, somewhere. No, the best kind of power is when powerful people create new power in other people without the total power being reduced, as when a teacher teaches a student. In other words, not all power is domination. When we believe that all power is domination, and that the ultimate nature of reality is a power struggle, we believe a lie.

Instead, Crouch argues that the ultimate nature of reality is that God created us to bear his image. When we fail to worship God as his image bearers, we worship idols. “The question is whether we are making idols—investing created things with ultimate significance—or whether we are being ‘idols’ in the sense of Genesis 1:26, images and signs of the ultimate truth about the world” (97). The bad uses of power that we see on a regular basis are not the inevitable result of the nature of power itself. Rather, abuses of power are brought on by idolatry, and “in the beginning it was not so.”

Probably the most eye-opening parts of this book for me were the chapters “The Hiddenness of Power” and “The Lure of Privilege.” I am, like Crouch, a white male citizen of the United States. By virtue of those three things alone (not to mention other factors like education), I am privileged, and in ways that are mostly invisible to me. For example, I once heard a few friends, who were women, talk about their experiences of hearing whistles and catcalls as they walked down the street. Before hearing that conversation, I thought that sort of thing only happened in the movies (and old ones, at that), not in real life. I have never had that degrading experience, merely because being a man has granted me certain privileges that I did not ask for, and that I mostly take for granted. Crouch writes of Jesus that while he did not give up exercising power, he did give up the privilege and status that could have accrued to his power. I’m not entirely sure I agree with Crouch’s precise distinction between privilege and status, but I do agree that inherited power can be good at some times and bad at others.

I haven’t even touched on Crouch’s chapters on institutions, which are a helpful challenge to people who are suspicious of institutional power. This book is worth pondering slowly, and perhaps with a group of people. I found it difficult to read quickly. It is not that Crouch’s prose is undecipherable; he is in fact a clear and lucid writer. But his subject matter is such that I had to pause frequently and reflect on what he was saying. This book is worth reading, and re-reading, especially for anyone who is suspicious of or cynical about power.

Note: Thanks to InterVarsity Press for a copy of this book in exchange for an honest review.