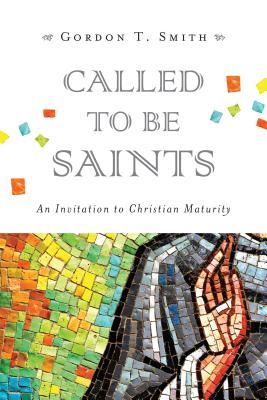 There are many books on Christian conversion, and how to begin life as a new follower of Christ. There are likewise many books on practices related to Christian spiritual formation. But what does it look like to be a mature Christian? What is the ultimate goal of conversion, on the one hand, and spiritual practices, on the other? Is the goal of becoming a Christian (to caricature a common belief) to have eternal fire insurance? To wait around for heaven, or the end of the world, whichever comes first? Gordon Smith has seen a gap in the literature on what Christian maturity looks like, and he aims to fill it with Called to Be Saints: An Invitation to Christian Maturity.

(A personal note, before I get into the review: I attended Regent College when Smith was a professor of spiritual theology there. During that time, his lectures on spiritual discernment were recorded during an evening class on a night when I was working part-time as a janitor. I remember the students being packed into that classroom like sardines, and during breaks, my friends in the class spoke highly of Smith as a lecturer. I never managed to take any of Smith’s classes, but I did listen to those lectures after I left Regent and found them to be wise and helpful.)

The book comes in six chapters, plus two substantial appendices. In the first chapter, Smith alerts the reader to the need for a “compelling theology of holiness.” The second chapter is the crux of the book, in which Smith maintains that Christian spiritual maturity is union with Christ. That is, “what makes the Christian a Christian is participation in the life of Christ Jesus, or union with Christ” (37). The goal is not merely to look like Christ, to ask “What would Jesus do?”; it is to actually participate in the life of Christ. “Without an emphasis on union with Christ, spiritual formation will be a frustrated effort to become like Christ” (48).

Chapters three through six look, in turn, at four characteristics of mature Christians: they are wise, they do good work, they love, and they are joyful. In each chapter, Smith looks carefully at what each of these means, and doesn’t mean. Finally, in two appendices Smith addresses the question of what this looks like in community: the first dealing with congregations, and the second dealing with Christian educational institutions. Although they are set apart as appendices because their goal is different from the chapters earlier in the book, they are just as substantial as the chapters.

The audience that I can see benefiting most from this book are Christian congregational leaders and educators, i.e., people who are responsible for shepherding others into maturity. I would not say that an average church attender could not get anything out of this book, but readers should not expect this to read like a popular-level “Christian living” book. It does not have short chapters or a lot of stories. It is published by InterVarsity Press’s academic imprint, and could be daunting for a reader who is not used to, or not expecting, a more academic style of writing. It demands to be read and re-read slowly, with pencil in hand.

Note: Thanks to InterVarsity Press for providing me with a review copy of this book. I was not asked to give a positive review.