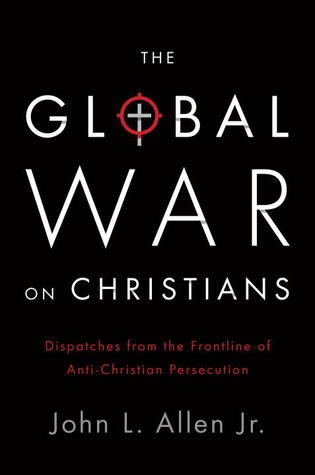 John L. Allen begins his book The Global War on Christians: Dispatches from the Front Lines of Anti-Christian Persecution by dropping this bombshell: “However counterintuitive it may seem in light of popular stereotypes of Christianity as a powerful and sometimes oppressive social force, Christians today indisputably are the most persecuted religious body on the planet, and too often their new martyrs suffer in silence” (1). How persecuted are they? Allen cites a leading estimate that says that 80 percent of all acts of religious discrimination in the world are directed against Christians.

By beginning his book this way, Allen, a Vatican correspondent for the National Catholic Reporter, hopes to get Western Christians, and those who have power more generally, to care more about this war on Christians around the world. Too often, Western Christians care more about the so-called “War on Christmas” than the fact that their brothers and sisters around the world are suffering and dying because of their faith. Allen is careful to distinguish between what he calls the “war on religion” in Western countries, which is about creeping secularism in public life, and the “war on Christians,” which is about violence and overt persecution. While the former is certainly happening, the magnitude of the latter causes it to pale in comparison.

In the first part of the book, Allen gives an overview of anti-Christian persecution around the world. In the second part, he looks at five myths about the war on Christians: the myth that Christians are at risk only where they’re a minority, the myth that no one saw it coming, the myth that it’s all about Islam, the myth that it’s only persecution if the motives are religious, and the myth that anti-Christian persecution is a political (only right-wing or left-wing) issue. In the final part, after talking about some of the fallout, he gives suggestions on what can be done: prayer, raising consciousness, thinking globally about the church, micro-charity, humanitarian relief, political advocacy, resettling refugees, and partnering with Christians from other parts of the world.

Allen’s claims in this book about the scope of anti-Christian persecution do not seem at all controversial. I made note of several articles about it while I was reading the book. Clearly, it is happening. An interesting angle that Allen takes is that he thinks the motives of the victims of persecution are just as important as the motives of the persecutors. For example, he tells the story of Sr. Dorothy Stang, a nun who was murdered in Brazil in 2005 because of her advocacy on behalf of the poor and the environment. While she was not killed because she was a Christian per se, she is a victim of the global war on Christians because she took the positions she did on account of her Christian convictions.

The only thing I would change about the book is that I wish Allen had included footnotes. He defends his omission of footnotes early in the book, saying that their inclusion “would become unwieldy” (26). All the same, since the intent of the book is to lower barriers to awareness, I think the inclusion of at least some citations would have helped his readers educate themselves even more. With that said, I would recommend that any Western Christian or member of the media read this book. While is not “light” reading, it is not intended to be. It is, as the back cover boldly proclaims, “time to wake up.”

Note: Thanks to the publisher for a review copy of this book in exchange for an honest review.