The nineteenth-century Danish philosopher Soren Kierkegaard was a Christian, but subsequent Christian readers have expressed divergent opinions about him. Francis Schaeffer, for example, associated Kierkegaard with the so-called “leap of faith” and condemned him for encouraging irrationality. Dave Breese, in Seven Men Who Rule the World from the Grave, expresses a similar view. On the other hand, Kierkegaard is viewed more positively by thinkers like C. Stephen Evans and Merold Westphal, and exerted an influence on such later Christian theologians as Karl Barth.

And if you decide to wade through opinions from secondary sources and judge for yourself (as it were) whether Kierkegaard is worth reading, where do you start? Many of his 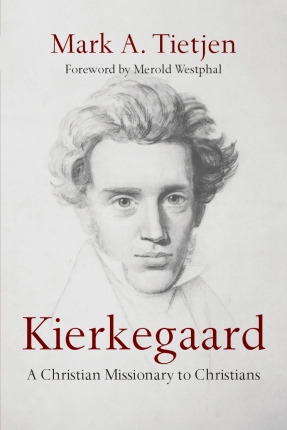 works, such as the famous Fear and Trembling and Either/Or, are written under assumed names, and it isn’t always clear to what extent what he says in those works is what he really thinks.
Thankfully, Mark Tietjen has written Kierkegaard: A Christian Missionary to Christians, an accessible introduction to Kierkegaard that summarizes some of his thought and points out some of the ways in which he is still relevant to our own time. But how can you be a Christian missionary to Christians? Tietjen explains:

One of Kierkegaard’s stated aims is to reintroduce Christianity into Christendom. In a sense Kierkegaard is a Christian missionary to Christians. This odd predicament necessitated, he believed, an indirect approach. If someone already believes he or she is a Christian, then the direct charge “you ought to become a Christian” will make little sense and likely offend or alienate one’s audience. So Kierkegaard decides he will take an indirect approach and provisionally grant his contemporaries their Christianity, and he will write some books from a non-Christian point of view with the hopes of generating introspection among the “Christians” of his day (42).

In other words, Kierkegaard was troubled by the fact that so many people in nineteenth-century Denmark, called themselves “Christians” because they mentally assented to a list of doctrines when they really were not Christians at all. His response was to make Christianity more difficult, and also to point out how the ways these alleged Christians were living actually diverged from real Christianity. In his book, Tietjen points out how Kierkegaard went about this with regard to the subjects of Jesus Christ, the human self, Christian witness, and the life of human love. Along the way, he sets the record straight with regard to the criticisms of Schaeffer, Breese, and others. Kierkegaard was not endorsing irrationality when it came to faith or saying that truth was unattainable. Rather, he saw that what was missing from the Christianity of his time was inwardness—the personal, whole life commitment to follow Jesus. According to Tietjen, “Despite this emphasis on passion or inwardness or the subjective side of Christian faith, Kierkegaard does not denigrate or minimize Christian doctrines or what his pseudonym calls objective truth. In fact, Kierkegaard assumes Christian truth to be true. He simply takes seriously the biblical view that the faith that transforms a human life reaches beyond the mind to one’s heart, soul and strength—to one’s passions” (41).

This is a wonderful book for those who have had some sense that Kierkegaard still has something to say, but aren’t sure where to start in his writings. Especially in places where it is assumed that what makes you a Christian is that you were raised in church or even mentally subscribe to a list of doctrines, Kierkegaard continues to call out that Christianity is both harder and better than this. And his style of indirect communication gives us an example of how to approach those who think they know what Christianity is but don’t.

Note: Thanks to InterVarsity Press for a review copy of this book in exchange for an honest review.

Also, here are a few resources for learning more about this book: