Rob Schmitz is the China correspondent for NPR’s Marketplace, and he lives on a street in Shanghai whose name translates into English as “Street of Eternal Happiness.” In 2012–2013 he reported a series of short stories on the people he met along the street, which lies in the former French Concession. Later, he reworked and expanded that material into a book: Street of Eternal Happiness. The stories Schmitz tells come together to give us a picture of what it’s like for people of various ages and backgrounds to navigate the political, cultural, and financial realities of modern-day China. 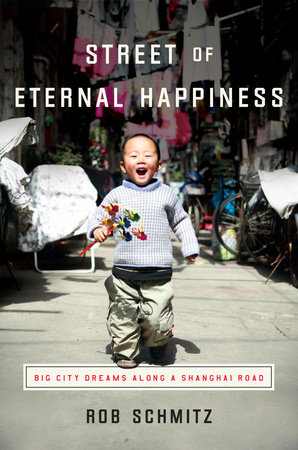 The book comes in 15 chapters, with 2–3 each dedicated to telling the stories of various people along the street. There is CK, the young entrepreneur who sells accordions and is struggling to get a sandwich shop off the ground. There are the residents of Maggie Lane, the area behind Schmitz’s apartment building, who don’t want their homes to be demolished and the area redeveloped, but are continually harassed by unscrupulous developers. There is Zhao, who left her husband, came to Shanghai, and was eventually able to open a flower shop, but is now trying to pass on her will to succeed to her two sons. There is the family of Wang Ming, a businessman who used to live along the street. He might have become rich if he lived today, but in the ’50s he was condemned as a capitalist and sentenced to hard labor while his wife was left to raise their seven children. And my favorite are Auntie Fu and Uncle Feng, the bickering couple who are kept on the brink of financial ruin by Auntie’s attraction to get-rich-quick schemes.

These cameos show us as well as any book on history or economics what it is like to live in China today: to experience a growing economy that grants increasing opportunity, but also has corruption and injustice. To live with a government that sometimes seems to be granting more freedom, but also sometimes seems to be out of step with the realities of the everyday life of the country’s people. I would recommend this book to anyone who is interesting in learning about what it is like to live in modern-day China. The stories make it a fascinating read even for those, like me, who are relatively unfamiliar with Chinese culture and history.