I like reading Malcolm Gladwell for the same reason I like reading G. K. Chesterton or a good mystery novel. He has a way of looking at reality in a counterintuitive way that sheds fresh light on particular issues and also helps readers to adopt an attitude of curiosity about their own surroundings. 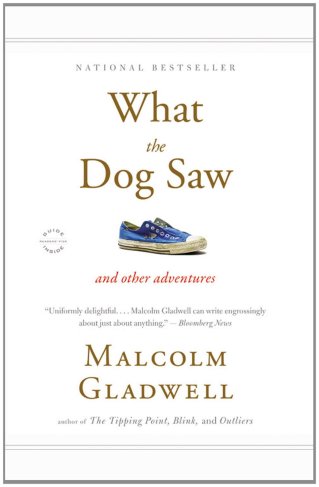 What the Dog Saw is a collection of Gladwell’s articles from the New Yorker that were published in the ’90s and early 2000s. The movements of the articles generally follow a few standard beats:

While not all of Gladwell’s articles follow this formula slavishly, it does pop up with surprising regularity.

For example, take the article “Most Likely to Succeed,” about the process of hiring people when you don’t know who would be best for the job. Gladwell begins with “the quarterback problem,” which is that playing quarterback on a college level is more dissimilar to playing quarterback as a pro than other positions in football. There is nothing like being an NFL quarterback. As a result, it is hard to predict whether a good college quarterback will turn out to be a good pro. The quarterback problem is like the problem of predicting whether teachers will be successful once they get into the classroom: “No one knows what a person with the potential to be a great teacher looks like” (319). It is also like the problem of trying to predict whether someone will succeed as a financial advisor. In the case of financial advisors this problem has been largely solved, however, not by raising standards but by lowering them: allowing more people into the field, and judging them after they have begun their jobs rather than before. For quarterbacks, this means trying out several on the pro level rather than just looking for the best college player and paying them a lot of money before they have taken a snap. For teachers (the real focus of the article), this means starting teachers in an apprenticeship system in which they are rigorously evaluated. It also means paying good teachers a lot more than mediocre ones.

As you can see, there is variation in the formula (here Gladwell compares three seemingly dissimilar things rather than just two), but it is largely there. Reading his articles doesn’t feel formulaic, though; he is telling stories to illustrate points, and stories are always interesting. The effectiveness of his writing stands or falls, though, on whether he is accurate in his choice of two (or more) seemingly dissimilar things to compare. Is this thing really like that other thing in the way Gladwell suggests? It all seems very plausible when you are reading him, and maybe he is right much of the time, but I do have my occasional doubts.

Regardless, I enjoy reading Gladwell because he is creative and almost paradoxical in his choice of things to compare, and it is exciting to follow along as he takes something that seems counterintuitive at first and makes it appear inevitable. The great benefit of reading him is that it helps me in my own life to stay curious and not take conventional wisdom for granted.

As a final note, I read part of this book and listened to part of it as an audiobook. The audio version is read by the author, and he does a great job. And did you know he has a podcast?