… cause a West Bank wadi is hot.

This is the seventh post in a series of reflections on my recent trip to Israel (to read them all, click here).

On the morning of June 21, our group headed north from our hotel along the Dead Sea and into the West Bank. We went for a long hike along the Wadi Qelt (also known as the Prat River), which begins near Jerusalem, runs east through the West Bank, and empties into the Jordan River near Jericho. 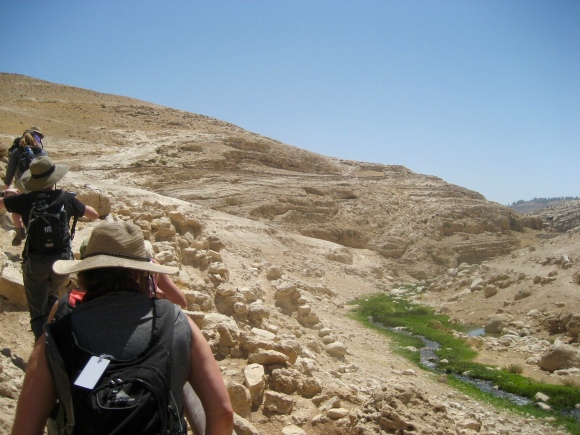 The focus of this hike was on experiencing the Judean wilderness. Traditionally, this is where Jesus was tempted for forty days (Matt 4:1–11; Luke 4:1–13). It is also the area where, in Jesus’ parable, a man who was beaten and left to die by robbers was rescued by a Samaritan (Luke 10:30–37). There are remains of an aqueduct along the Wadi Qelt that Herod the Great built to bring water to his palace near Jericho. In later times, desert-dwelling Christian monks were drawn to live there, and it is today home to Saint George’s Orthodox Monastery.

Along the hike our group leader, Tim, had us sit down on a sunny hillside above the wadi and talked to us about the significance of shade in the Bible. In our culture, shadows often evoke something sinister, but in the arid climate of Israel they were an image of protection. Sometimes the Hebrew word for shade or shadow (tsel) is even translated “protection,” as in Numbers 14:9 niv: “Do not be afraid of the people of the land. … Their protection [tsel] is gone, but the Lord is with us.”

God himself is represented in Scripture by tsel. Several psalms talk about taking refuge in the shadow of God’s wings (Pss 17:8; 36:7; 57:1; 63:7). Others call God tsel more directly: “Whoever dwells in the shelter of the Most High will rest in the shadow of the Almighty” (Ps 91:1); “The Lord watches over you—the Lord is your shade at your right hand” (Ps 121:5).

The imagery of shade as protection, and God as shade, was driven home to us on this hike. The sun beat down on us, and there were few plants or rocks big enough to provide shade. In Tim’s talk, he pointed out that we often get just enough shade in life to keep going. God doesn’t promise that life will be easy, but he does promise that he will serve as shade. Also, when we are in the wilderness we are not alone. Jesus has entered the wilderness with us, and has gone ahead of us, enduring testing on our behalf. He keeps us going so we can provide shade for others.

Tim ended his talk by asking us, when we got home, to ask those close to us whether we provided shade for them. In fact, we would be given the opportunity to provide shade for one another before the end of the hike. Soon after Tim’s talk, a few in the group began having trouble with the heat and had to slow down and take frequent breaks from walking. The group became stretched out along the trail, with several people staying behind to assist those who were struggling.

At one point we began to descend a rocky hillside, and the path was not always clear. I saw that if I kept up with the first group, the people behind would not be able to see the way easily. So I stopped and sat down on the hillside in the sun by myself. I don’t know how long it was; maybe just five minutes. But it was long enough for me to reflect on Jesus’ temptation in this harsh wilderness to be spectacular, to be relevant, to do what messiahs did by giving people what they wanted—and his resistance to that temptation.

I don’t think stopping and waiting was especially heroic; just about everyone in our group who was able to help someone else did so in one way or another. But I do think that stopping and waiting when I had the ability and inclination to go on was crucial for me. That moment of deciding to serve was a pivotal point of the trip, and I think many others in the group had similar moments on that hike.

Later that night (after visiting the ministry Seeds of Hope in Jericho and then taking a dip in the Dead Sea), I wrote this on the GTI Tours blog:

Like so many wildernesses in the Bible, the Judean wilderness is a place of testing. … As we hiked, many of us were tested by the heat, by the terrain, and by our own tired bodies.

But wildernesses are also places where God reveals himself, where he proves to be a refuge for his people. David hid out in the wilderness when Saul was trying to kill him. John the Baptist announced his message in the wilderness, quoting Isaiah: “in the wilderness prepare the way for the Lord” (Isa 40:3). When we’re tested, it is tempting to respond by digging deeper into ourselves, trying to pass the test using our own intelligence and determination, not letting others know the degree to which we need help. But while intelligence and determination are two of God’s gifts to us, he didn’t make us to get by on those alone. He made us to rely on him, and on others whom he has placed in our lives.

We all find ourselves in the wilderness at one time or another. I pray that God will help me to show compassion to those who might be in a wilderness that isn’t readily visible to other people. And when I’m in my own wilderness, to not rely on my own intelligence and determination but to ask for the help of both God and other people.

Elliot was born in Michigan and raised in North Carolina. He has studied at Regent College and the University of Richmond, worked at newspapers in St. Petersburg and Los Angeles, taught ESL in eastern Europe, given tours in Alaska, and driven a school bus. Now he lives in western Washington and works as an editor at Lexham Press, the publishing arm of Faithlife Corporation.