This is the tenth post in a series of reflections on my recent trip to Israel (to read them all, click here).

On our first morning in Galilee, we took a bus from our hotel in Tiberias up to the Mount of Beatitudes. The bus dropped us off next to the Church of the Beatitudes, but we didn’t go inside. Instead, we walked out to a place on the hill where we had a panoramic view of the Sea of Galilee and sat down on some black rocks. One by one, five members of our group stood up and recited the Sermon on the Mount.

Afterward we visited the site of Capernaum, which served as Jesus’ headquarters during his Galilean ministry. It is home to a synagogue from the fourth century, which was built on top of a previous synagogue that dates to the time of Jesus.

Close to the synagogue is a house that many scholars believe was Peter’s house. Today there is a church built above it, though the remains of the house are still visible underneath. The shore of the Sea of Galilee is not far away. 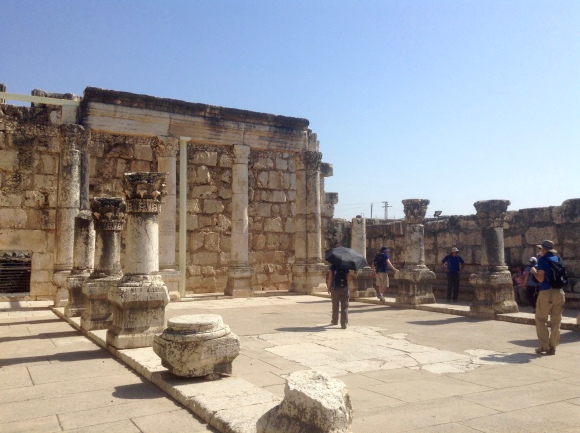 Our third stop that morning was Chorazin, another one of the small Galilean towns where Jesus spent much of his ministry. Then, after stopping for some falafel, we went to Qatzrin, a reconstructed Israelite village. Our group leader, Tim, took us there so we could have a better idea of what ancient villages really looked like, including intact rooms and thatched roofs held up by wood beams. We sat inside a house for a bit while Tim recounted for us the story of the paralyzed man whose friends lowered him through the roof.

In all these places, I was struck by how ordinary they were. There were no grand edifices, no soaring temples that would give you a sense of the grandness of God by their beauty and spaciousness. The Mount of Beatitudes is an average-looking hillside. Capernaum and Chorazin weren’t very big towns.They were achingly average, and yet some people want to see them so badly that they will dig up their remains, and other people will fly across the planet to stand on those remains. These places were infused with meaning and made significant by the things that happened there.

Last weekend I saw the movie Don’t Think Twice, about an improv troupe where one of the members gets chosen for the cast of a “Saturday Night Live”-style show. When he becomes successful, the group has to deal with the repercussions of his newfound fame, including deciding whether it is worth it for them to continue pursuing that kind of success. One of the interesting things about the movie was that “making it,” being successful in the eyes of the world, is not always all it’s cracked up to be. Often, toiling away in obscurity, doing something you think is worthwhile and meaningful with your friends, is much better. Mike Birbiglia, who wrote and starred in the movie, said as much in an essay in the New York Times:

Forget the gatekeepers. As far as I’m concerned, what you create in a 30-seat, hole-in-the-wall improv theater in Phoenix can be far more meaningful than a mediocre sitcom being half-watched by seven million people. America doesn’t need more stuff. We need more great stuff. You could make that.

This is a principle that applies to more than just performing. The most significant things are often done out of the limelight, in an obscure place. Not only that, but they can often only be done there. Jesus knew this. He did not want to be a public figure; he wanted to do what he saw his Father doing. The fact that Jesus’ own brothers assumed he wanted to be famous was a sign that they didn’t believe in him:

When the Jewish Festival of Tabernacles was near, Jesus’ brothers said to him, “Leave Galilee and go to Judea, so that your disciples there may see the works you do. No one who wants to become a public figure acts in secret. Since you are doing these things, show yourself to the world.” For even his own brothers did not believe in him. (John 7:2–5)

Seeing the ordinariness of the places where Jesus spent so much of his time had a huge impact on me. I knew in theory that they were small, but standing there and looking around brought me to a new level of awareness. And it made me question some of the ways in which I unconsciously go along with the way the world sees things: assuming that hidden acts in small places are therefore insignificant.

Too often, I think I assume that the only sign of significance is drawing a crowd (for example, how many people read this blog post). Is this assumption keeping me from doing something that has value in itself, apart from how many people see it? How can I pursue fidelity and excellence where I am, doing stuff that is, in Birbiglia’s words, “small but great,” and not caring about being successful or admired in the world’s eyes?

Elliot was born in Michigan and raised in North Carolina. He has studied at Regent College and the University of Richmond, worked at newspapers in St. Petersburg and Los Angeles, taught ESL in eastern Europe, given tours in Alaska, and driven a school bus. Now he lives in western Washington and works as an editor at Lexham Press, the publishing arm of Faithlife Corporation.

4 replies on “Galilee and the God of the Ordinary”

Elliot, this was well written and genuinely edifying, enlightening, and encouraging.

Thanks so much, Mark!

I read it and yor words open my mind to new ways of looking at my life. I don’t think I woll ever make this trip and through you I can see it in my minds eye. Significant that God uhas always used the ordinary average to works His wonder She!