This is the twenty-fifth and last post in a series of reflections on my trip to Israel last summer (to read them all, click here).

After emerging from Hezekiah’s Tunnel and taking vans back up toward the Temple Mount, our group made our way to the southwestern corner of the Temple Mount’s retaining wall through an ancient sewer. I’m still not sure why we went through a sewer to get there, but it was kind of neat. It didn’t smell like a sewer, at any rate.

At the base of the Temple Mount’s retaining wall, we could see heavy stones scattered on the ground, some of them possibly right where they fell when the Romans destroyed the temple in AD 70. Above us was what is left of Robinson’s Arch. To our left, and up, was the entrance to the Western (or Wailing) Wall. One of the stones on the ground in front of us was a replica of the top corner stone from the Temple Mount that had fallen among the others. On it were carved instructions that indicated a shofar was to be blown from there at various times such as the beginning of the Sabbath. The original is in the Israel Museum. 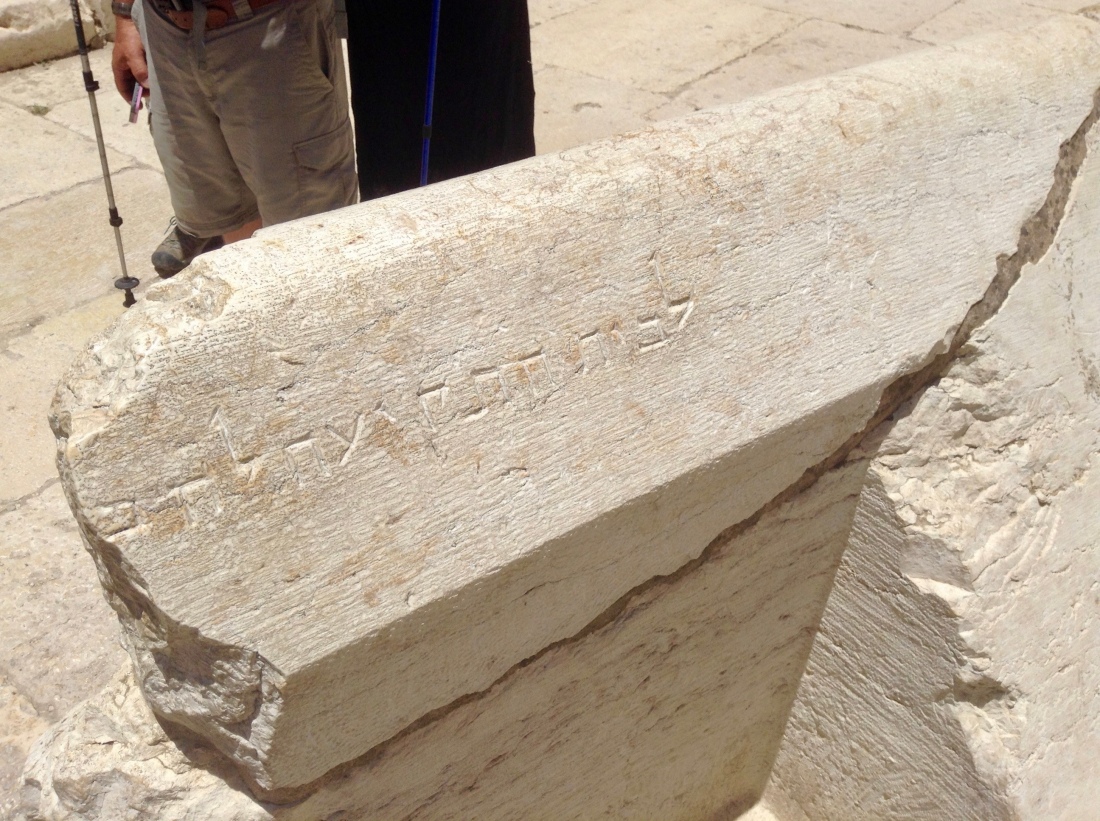 From the southwest corner we made our way east to the Southern Steps, which were where the main entrance to the temple was in Jesus’ day. As we walked we heard a haunting, guttural call to prayer from the gray-domed al-Aqsa Mosque above us. At first it was hard to know what it was; the loudspeakers distorted it so that it hardly seemed like a human voice. It may also be that it sounded strange because we were hearing multiple calls to prayer from other mosques in the area.

After walking around on the Southern Steps and looking at the gates that had been closed up there, we went back around the southwestern corner of the Temple Mount, where we had lunch before we went through security to enter the area next to the Wailing Wall. Before I went, I was a little confused about what the Wailing Wall was, so I’ll explain it here. It is one section of the western side of the retaining wall around the Temple Mount. It isn’t all that remains of the temple, but it is the closest place that Jews can get to where the temple used to be and pray. On the Temple Mount itself, only Muslims are technically allowed to pray.

Inside the area, there are separate spaces for men and women, with the men’s area being larger. When we were there, most of the people were Jewish, with a few other non-Jews like us sprinkled in. Anyone who wants to can go up and touch the wall and pray, and find a crack to insert a written prayer. Before approaching to pray, Jews wash in ceremonial basins that are set back from the wall. I went up to the wall, touched it, and prayed, but I didn’t write a prayer down to leave in the cracks.

After spending some time there, several of our group walked back to our hotel through the Muslim Quarter, stopping to get a smoothie along the way. Later that afternoon I would go back out and walk along the Via Dolorosa by myself, and we would have our farewell dinner at a rooftop restaurant and gather once more back at the hotel to share our reflections on the trip, but the official itinerary of our trip ended at the Wailing Wall—so I’ll end my reflections here too. 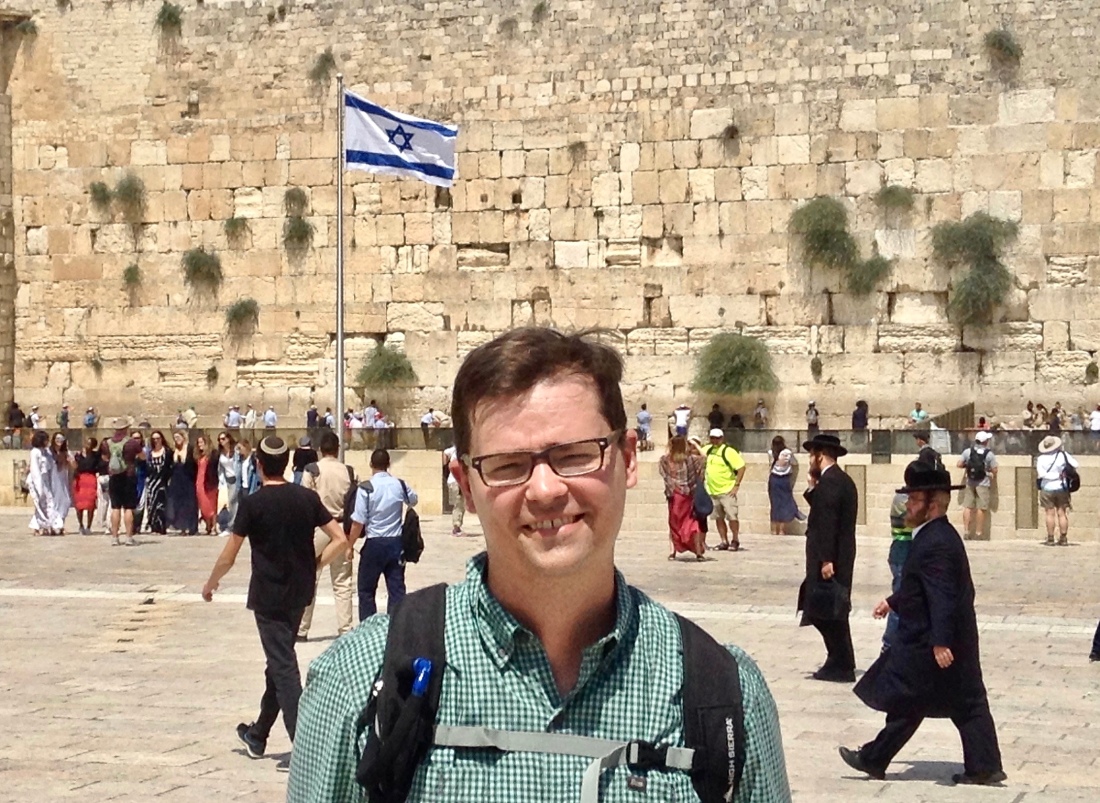 As I mentioned when I wrote about the Church of the Holy Sepulchre, I found myself conflicted over what it meant for me to visit the Wailing Wall. On the one hand, I think it’s entirely plausible that this is very close to where the ancient temple was, and in it the holy of holies where the God of Israel manifested his presence in a special way. It’s a significant place because of that fact alone.

Yet as a Christian who believes that Jesus is the true temple, the fullest manifestation of God’s presence there has ever been in the world (Matt 12:6), and that his church, united to him by his Spirit, is also the true temple of God (1 Cor 3:16–17), I do not believe that anyone needs to come to the Wailing Wall in order to get closer to God or have his ear. When Jesus came, the temple became redundant. God’s presence is not closer here than it is anywhere else.

So here is where I get into my opinions on geopolitics, which I haven’t really shared during this series describing my trip to Israel. While some Christians believe in an end-times scenario that requires the temple to be rebuilt, I do not. While I do believe that Jesus will return, I don’t think he requires the temple to be rebuilt, or Jews to be occupying the land of Israel, for that to happen. That is based on a particular interpretation of biblical prophetic texts that I disagree with. I think there are pragmatic reasons for the United States to be allied with Israel (they’re a representative democracy in the Middle East, they’re probably a nuclear power, etc.), but not theological ones.

I don’t know what the solution is, but I think that decisions in this matter should be made out of concern for justice and the flourishing of all people involved, not because certain actions would fulfill prophecies. I believe there are no prophecies of Christ’s return that depend on Jerusalem being the capital or the temple being rebuilt for their fulfillment.

Nevertheless, in this Christmas season where we celebrate Christ’s first advent, I still look forward to his return and pray with the early church: Marana tha! (Come, Lord)! (1 Cor 16:22)

4 thoughts on “The Southern Steps and the Wailing Wall”